At some point over the last couple of years its likely you would have heard of Nick Kyrgios. Very young, very talented and very controversial, since his emergence on the world stage, he hasn’t been far away from the headlines. 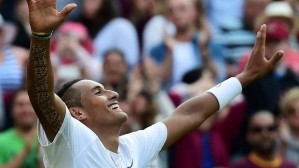 There’s no denying that the Australian has serious talent. He burst onto the world stage with his match at Wimbledon against crowd favourite Rafa Nadal. At the time he was ranked 144th in the world but in an incredibly confident performance he flew to a 4 set victory, stunning the world. His confidence was typified in this match by a through the legs shot described as the ‘shot of the year’. The shot was so outrageous and if you haven’t seen it yet follow the link here because it is truly incredible. https://www.youtube.co/watch?v=7DJgHwseiDI

This year has been very promising also. Kyrgios has made it into the top 30 this year and is now on the lips of many tennis fans who are wanting to watch his style of tennis. His powerful quick style of play is very entertaining and with a large element of flair in his game he is becoming more and more the center of attention on a tennis court.

Unfortunately what he is being talked about most of all is being controversial on the court. He is a highly charged character and does not fall into being a typical tennis player. Due to this most of the headlines about him have been due to this rather than his tennis. Most recently he has been in trouble this week for a remark he made about Stanislas Wawrinka’s girlfriend in between points. The Australian is often one for racket throwing and is frequently warned for his conduct on the court. He was seen arguing with umpires twice at Wimbledon which, at such a prestigious venue, is very much frowned upon.

This latest outburst however, is being seen as little more serious. Kyrgios alluded that his Davis cup team mate Kokkinakis, had slept with Wawrinka’s girlfriend. The Swiss national had to retire from the match through injury but confronted Kyrgios after the match as well as taking to social media to explain his outrage at the incident which you can see on his twitter @stanwawinka.

In reality though I think the incident has been exaggerated an insane amount. In cricket sledging is part of the game and happens extensively especially in the big matches like the Ashes. Just to confirm I wouldn’t condone his actions, he has been fined by the tour and deservedly so but to call for a suspension or any further punishment is ludicrous. He’s a maverick like figure and unfortunately those individuals can overstep the line sometimes, but tennis would not be anywhere near as exciting without his influence. He’s a similar figure to John McEnroe who was constantly in trouble with officials and umpires for his conduct and he is still known despite this as one of the best male players ever.

I think it is important to remember that Kyrgios is only 20 years old. He does have maturing to do but it is not the first time a young sportsmen has made headlines for the wrong reasons. He is one of, if not the, best young player in tennis at the moment and to ban the Australian would in my view be a terrible decision. Tennis needs a big personality to get people talking and with that and his raw talent, this means that overall he brings more positives to the game than negatives.

There was an error retrieving images from Instagram. An attempt will be remade in a few minutes.